Although Judith Wolken (nee Schuler) had a degree in elementary and art education, there was not yet an avenue for her to teach art and so she taught 2nd grade at Newhope Elementary School in Garden Grove, CA.

But to her delight she saw on the cover of the April 1965 Grade Teacher Magazine, there was a class being offered for a summer art workshop on a boat at the ocean in a place called Amagansett and Judith applied (through New York University) and was accepted to participate in the Teacher Training Workshop, and for credit too. The name of the class was Creative Art Teaching and it was taught by Victor D’Amico.

At the time, Judith was 23 years old and had never traveled to the East End of Long Island. She drove from Ohio to East Hampton by herself. Housing arrangements were made via various volunteers in those days and she was assigned a room at the home of Connie Anderson. She arrived very late and found lots of people, all welcoming, and came to find out that Bobby Darin was there playing the piano (where he rented an executive suite from Ms. Anderson).

While teaching in Southern California, Judith had met an older woman who had been teaching in the military at various bases throughout the world.  Judith had wanted to teach in Japan and she states that the program at The Barge launched her into pursuing teaching art abroad. While she was at the workshop, she received notice that she had been accepted into a teaching program in Germany at an army base, teaching junior high school children art.  She stayed there for the required two years and also became a consultant to elementary school teachers there.  After that, she fulfilled her wish to teach in Japan and taught there at a Navy base again teaching junior high school art.

She also used Victor’s concepts of the elements of art in her master’s program where she continued to use her training in a humanities program that focused on art, music, and theatre.

Judith said that “at 23 years of age, she didn’t have the big picture” and couldn’t yet foresee the  influence Victor D’Amico would have on her teaching career.  She remembers Victor as being a very approachable man, just like “one of us.” It was also at this weeklong teacher training that Judith had the opportunity to study glass fusion with Mabel D’Amico. She didn’t know much about glass and found the course very enriching. Mabel’s class developed in her a love of glass and she has become a collector of glass objects and glass art.

Judith made several friends at the class, two of whom were women from Puerto Rico. They refused to let Judith go back home to Ohio before experiencing New York City and so the three embarked on a tour of all the major New York City attractions, including the Statue of Liberty. 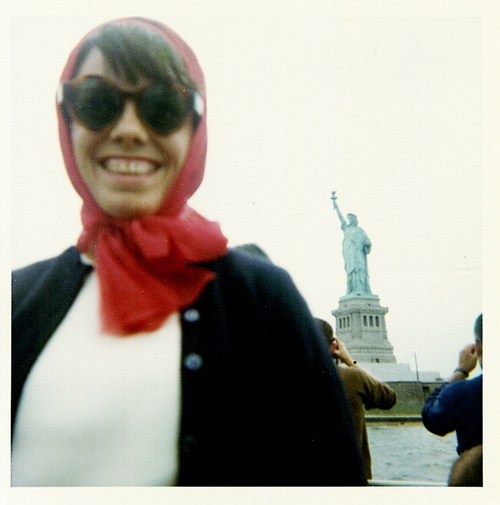 When Judith came back to visit The Barge in 2012,  it was very emotional for her and brought her back to an experience that had launched her into so many of her life-long passions.  She said she didn’t want to leave and savored every minute of her visit.

Although Judith ultimately gave up teaching when she and her husband relocated to Europe, she now lives in California and has remained involved in the arts through her work on the Steering Committee of the Stanford Contemporary Collectors Circle which arranges trips for members to various arts organizations and historic artists’ homes.  She hopes to arrange a visit for the group to The Barge and The D’Amico Studio and Archive.

Judith reflects on her time at The Barge with Victor D’Amico as a life-changing experience which set her on a marvelous path and that “Art is a huge part of my life.”  She believes it was the pebble in the pond whose ripples concentrically grow and touch so many lives in the process.

Documents and photographs graciously donated to our archives by Judith Wolken.

THE VICTOR D’AMICO INSTITUTE OF ART